When to call a fight 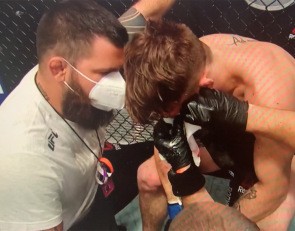 It was only a few months ago I was talking about the decision to throw in the towel as a corner, my how things have changed after this weekend’s controversy.

If you missed the recent UFC on ESPN 11, Max Rohskopf was making his debut against Austin Hubbard. Unfortunately for Max, taking the fight on 5 day’s notice may have been too much pressure to bear. The fight didn’t go his way, and he was taking a good beating physically, but the greatest damage was done mentally.

After 2 rounds, he had enough. While his coach Robert Drysdale was working on motivating him to come out hard with a wrestling game plan in the final round, Max asked for Robert to “call it.”

Robert worked to dispel the doubt in Max’s mind, but unfortunately he wasn’t able to. As the referee came to check on Max at the start of the final round, he asked if Max wished to continue, to which Max replied, “No sir.”

In the aftermath, spectators were commenting on the corner for being irresponsible for not stopping the fight, and making all sorts of outlandish claims about Drysdale being reckless.

Honestly, I thought Robert handled that situation with the utmost professionalism. I have seen coaches who have berated fighters, giving them a smack on the face to snap them out of situations less dire than this.

Robert was incredibly supportive and positive, never once putting down his fighter in a negative fashion. Even Max’s mom chimed in afterwords supporting Robert’s actions.

The fact he is getting criticism for doing his job is ridiculous to me. The coach is there to give you support, tactically, emotionally, and a small degree physically (addressing wounds, giving water, and applying ice).

Mixed Martial Arts isn’t tennis. Everyone stepping into the cage is going to get hurt without a doubt. To what degree varies. Throwing in the towel is there to save the fighter when the fighter is not going to save themselves.

This situation was the opposite. The fighter wasn’t willing to fight anymore, and hadn’t taken serious physical injury. He was able to call the fight himself, which is his choice at any time. That is what tapping out is for.

I’m not here to judge Max. I know him and have trained with him. I actually introduced Max to Robert a few years back when Jason Soares was preparing for EBI.

I am not sure what he was dealing with, but I’m sure he had a mountain of stress on top of him, and he had a moment of weakness. It happens to us all.

When I was younger, I had training sessions that I left and cried like a baby on the drive home because I got whooped so bad. Heck, I even cried at a wrestling tournament after suffering the first defeat of my junior season, and was a wreck. My brother and coach Tirso gave me some tough love and set me straight, as I still had more matches left that day. I ended up getting a rematch with the guy that beat me in the consolation finals and beat him back to get a bronze.

Fortunately for me, I learned these lessons early in my career. I had my weaknesses exposed, accepted the responsibility for them without excuses, and rebuilt myself into a better man that would not succumb to those pitfalls of the past.

Unfortunately for Max, he learned a hard lesson in the public eye. Only he can truly know what went wrong, but my advice to him is to own it – not to shy away from the failure, but to embrace it.

Big losses are game changers. Your concept of self, your ego, gets shattered. The mistake most people make is they try to get back what they had before the loss. You can’t. That person no longer exists.

Instead, you have to create a new image of yourself. One where the flaws of the old you are removed and replaced by stronger traits. While conceptually this sounds simple, this metamorphosis is difficult.

We have a hard time letting go of things that we have known to be true and love. Even when they are destructive or no longer alive. The pain of holding on to the past seems easier than the pain of changing into the new and unknown.

This takes some deep introspection and honesty. It isn’t an easy journey, but if you walk the path and do the work, you will look back and be grateful for the failure, as the lessons learned will be invaluable to you and others that will follow in your footsteps.