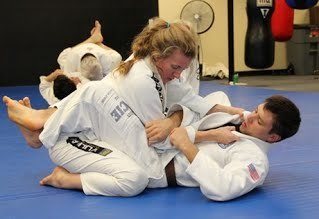 On my Facebook, I have seen a bunch of posts lately about men asking about how to refuse training with women, how hard to train with women, and proper etiquette.

So I will take the opportunity to give you my opinion on how to go about this from the male perspective.

The obvious answer is that it shouldn’t really matter if it is a man or a woman. If they are willing to train, there shouldn’t be any issues.

Some people feel uncomfortable training with the opposite sex, whether it is for religious or personal reasons.

I don’t get that personally, but it’s your life and you choose how to live it. If you don’t want to train with someone, you don’t have to.

If it was me, I would just be honest and say whatever the reason was. If you feel ashamed to say it, that tells you something about yourself.

Now if we are playing ball and are going to train, the other question I see is how intense you are going to go when facing the opposite sex?

That depends. I am 198lbs, and have always been much heavier and stronger than the women that I have trained with. So I practice what I consider common sense – I go light. It’s just like if I was going to train with a child – I can’t go 100% without hurting them.

Even if the kid is going to go 100% on me (which I would expect given the size and strength advantage I have), I pull back and focus on using technique more.

I read a post of a man claiming he is 6’3″ and 280lbs, and was asked by the female partner to go hard. That seems like a terrible idea on both their parts. He didn’t mention the woman’s size, but I’m assuming much smaller (in my mind I imagine 5’2″ 140lbs).

Even if the woman was a black belt and he was a white belt, that much weight and strength is going to be hard to handle. She may well tap him out a bunch, but she will probably suffer a lot of damage while doing so.

The closest parallel I can draw personally is when I train with a purple belt in my Miami academy that is 6’3″ and 350lbs. When I train with him, 90% chance I will leave with some sort of pain in my body. That is me, being a strong, athletic 198lb man against someone less than double my size.

So it’s not that a woman couldn’t handle it, but at what cost? Just to be clear, I go light with lighter men as well (for me I consider that 160lbs and under) and opponent’s whom I hold a significant technical advantage over.

What does going light mean?

I do not drop all my weight on them, and I carefully apply force. I’m not just going to try and bull doze my way through them like a bull in a china shop. I’m focusing on technique and precision.

Sometimes, that means I will “lose” a sparring round to the smaller person. So what? It’s training. If I was competing in the absolute division of a tournament, that is a different story. I would go 100% and obliterate whoever was in front of me – big or small, man or woman, young or old.

What if you are the same size, or smaller than the women you are training with?

Then the situation changes, as now the weight and strength gap are closer (or perhaps you might be at the disadvantage). I haven’t been in this situation, but if I was training with a woman my size or larger like Gabi Garcia, I would be playing my A game and treating her like any other training partner I may have.

If you are concerned about getting tapped by a smaller person, or the opposite sex, you are worried about the wrong things. I have seen it plenty of times, where a woman would tap out a man, and then that guy starts going wild. In my mind I’m thinking, “Get a grip buddy!”

Do you think a male gazelle worries about the sex of the lion chasing him down? Not if he wants to live, lol. He is focused on running to survive.

So I have been laying it down on men, but women (and smaller people) have responsibility too.

I have seen women go crazy when grappling, throwing elbows and knees all over the place like a cat in a bath. All because you might be smaller or weaker than your training partner, doesn’t mean you can’t hurt them.

Personally, smaller guys tend to hurt me more than bigger guys, because of the spaz factor. They know they are smaller, and fight much harder, but lack control.

That is an annoying situation as a bigger guy who is trying to be careful. It’s like trying to corral roosters – you are being gentle in handling the bird but it is all beak and claws.

Don’t be that person. Be cool. Fight hard, but stay in control and watch them pointy elbows and knees please. Especially when you know the person is being careful, return the favor.

What if you are a woman or smaller man and really want to challenge yourself and see how you will handle yourself against a bigger opponent going 100%?

Let me say that as someone who has competed in absolute divisions throughout my career, I have played the literal David vs Goliath scenario many times. So I get the need to challenge yourself.

In training, even though I am usually around 200lbs, I had many partners that were 240+ pounds, with my brother being the lightest guy in the room at 170lbs.

Personally, I don’t think it is healthy long term to put so much stress on your body training regularly with bigger guys. It would be like doing max weight lifts every time you train. You are putting a ton of stress on your joints and it’s just a matter of term before you get hurt. You go for max lifts once every 6 months or so. Likewise, if you want to go hard with a bigger guy, do it seldomly.

But, be smart about this. As a 198lb man, I have a body frame that can support going up against heavy weights much better than a 110lb woman. Like it or not, it’s science.

If you are 110lbs and want a 350lb behemoth to go 100% on you, there is very little chance it will be a constructive experience. Just as a 200lber, I have to be cautious about how I apply force against smaller women. With someone who is huge (250+ lbs), it’s not realistic. If I was the bigger guy, I would refuse in that situation and just go light.

At the end of the day, I want everyone to walk out of training better than they walked in. If you get squashed and hurt, that isn’t going to happen. So I follow the Golden Rule, and treat others like I want to be treated. So I take the welfare of my training partners seriously, and regardless of whom I’m facing, make sure that both of us are safe as can be in a sport that’s goal is to maim each other. 😉