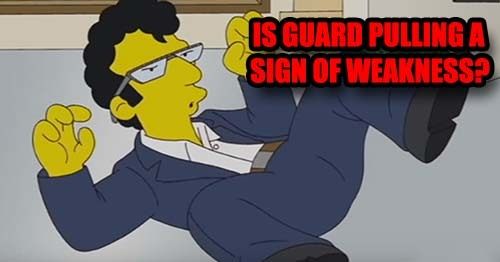 “I would prefer a sword to fight duel, but a pen to plan a war. “

Robert Thier, Storm and Silence

When you see a fighter pull guard, it is usually seen as a desperation move. Someone who just got rocked from a strike, or just trying to avoid a superior striker.

But that doesn’t mean there aren’t good reasons to pull guard, or even offensive guard pulling. For example, we don’t have to look far in our memory to remember how pulling guard worked out well for Ryan Hall vs Bj Penn:

A good strategist doesn’t look past any tactic, as they all have their use in the right situation. There are many scenarios in battle that can factor into what tactics you will use. Your opponent is probably the biggest factor in such a decision, as knowing their strengths and weaknesses in comparison to your skills will decide how to fight this battle.

Against an opponent where you hold a major advantage on the ground, pulling guard can put you in a strong position. It can minimize the striking potential as you remove their legs from striking, and the angles of striking are much more predictable. A crafty guard player can attack with submissions and sweeps from bottom.

It can also be used defensively, if you need to recover from damage you have sustained. A tight over hook guard can slow the pace down and keep you from sustaining any serious striking.

In the Ryan Hall vs BJ Penn fight, Ryan used his guard pull offensively to setup a leg lock.

But with every tactic comes risk of failure. Usually, when pulling guard offensively to attack and fail to secure a hold, their opponent will call them back up. So it has a very low risk in this scenario. But, the crowd hates it and I’m not sure how judges view it. It can also have a demoralizing effect on the guard puller that can become desperation if their resolve is not strong.

Sometimes you may fall in a really bad position, such as going for a failed flying arm bar, that could give your opponent a strong position that can cost you the fight. If you are a strong grappler, usually this is not a big concern. But if you aren’t a grappling specialist and just go for a submission like a guillotine and fail it can be a disaster.

Similarly, defensive guard pulls can be low risk to a superior grappler. When someone like Demian Maia pulls guard, pretty much everyone will stay away and call him back up if he fails to hold his opponent. However, a weak grappler who fails to secure a strong guard might just give his opponent a strong position to drop bombs from top.

So I don’t have an issue on pulling guard in MMA, as long as it is used wisely. I have had my fighters use both offensive defensive guard pulls multiple times in fights that have resulted in sweeps and submission wins.

The people who give pulling guard a bad name are those that just flop to their butt or hopeless telegraph their attempts and fail repeatedly. It is usually someone that didn’t prepare properly and the results are repeated failures.

If you are just relying on a guard pull, you have made a terrible calculation in your strategy. It should just be one tool in your arsenal. If it is your only hope, you are probably screwed, lol!