Training with the Gracie Family in Los Angeles 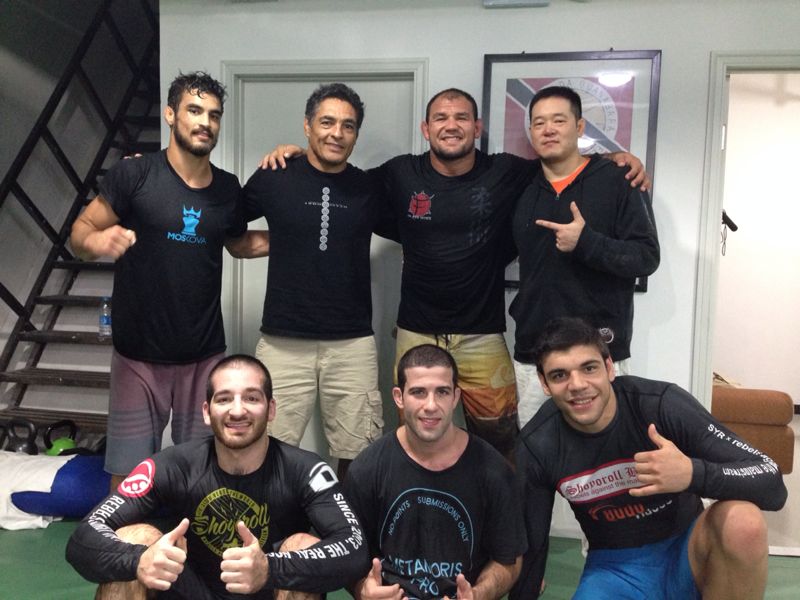 After sending out some messenger pigeons, I made contact with my friends in LA.

I decided that I will go and pay my respects to all of them and pay a visit to each of their academies.

On Thursday, first on deck was Javier Vazquez. I have known his wife Rose Gracie since the Ultimate Submission Showdown in 2003, so she was kind enough to extend an invitation to me to train with Javi. I respect Javier, as he is an old school MMA fighter. He has been in the game just as long as I and I like his approach to the fight game. He is very organized and methodical – just like me.

It was a bit of a trip to Rancho Cucamonga, but it was well worth it. He has recently opened his academy, (http://www.graciejiujitsurancho.com) and it has a very nice layout. We must have rolled around for an hour or so, and it was a great start to my training trip in LA. Afterwards, he was kind of enough to show me a sample of a training manual that he has been on working on for over 2 years. I was very impressed by the level of detail of the instruction, and I think it will be a great aid for students and instructors alike. If you are in the area, it is definitely worth the visit and a great place to train.

Ryan was a Big Ten Wrestling champion, which is a pretty big deal in the wrestling world. Unfortunately, he suffered a complete tear of his meniscus in a training accident. He just had surgery a month ago, and was undergoing rehab so he was only watching class. I was happy to see that he was still taking the time to come to class, even though he couldn’t physically participate. I offered him some words of encouragement, which he thanked me for afterwards. It was great to see the humbleness he exhibited, which to me is a credit to Kron.

Once Kron finished his class, I jumped on the mats and got my workout in. I was impressed with Kron’s Academy, (http://krongraciejiujitsu.com) especially his mats, which is a floating mat. If you are no familiar, it is essentially a tatami style mat with springs on the bottom. It allows you to work throws with a soft landing, while still having the speed to move quickly. I was working purely on drilling exercises, and he had one of his students, Stefan, work with me. I got a good session in, and afterwards we grabbed Sushi for dinner. I am not much of a sushi guy, but I trusted in the champ’s picks and it paid off. The man knows his sushi. 🙂

For Friday, I woke up and moved to my new home with the coolest guy in BJJ – Scotty Nelson from On The Mat (http://www.OnTheMat.com). He is awesome to let me stay at his place, and I am very grateful to have such friends. He had to go early to work, and I went to work at Kron Gracie’s academy again. This time around, I had two partners who were also doing the No-Gi Worlds, so we took turns drilling with each other.

There is one drill that I enjoy doing a lot, which is trying to pass my opponent’s guard WITHOUT touching him with my hands. It helps develop footwork skills for passing, and allows you to develop fast hips to pass. I was doing a lot of Cart Wheel passes, which I showed afterwards to my partners. I have to say that I really enjoyed the camaraderie that I have seen in Kron’s academy. Reminds me of being back home at FFA. 🙂

After training, I went to eat some Persian cuisine at Pars & Jino by LAX. It was a pick made by Scotty, and what a pick it was! I was hungry, but this place has ridiculously large portion sizes, along with amazing flavors. I am just glad that I don’t have to worry about making weight for the No Gi Worlds, because that was a feast I partook in, lol!

Once I finished, I went back home and passed out for a few hours. Now I rest until tomorrow, where I will be training again at Kron’s for an open mat session. Next week, I will be paying visit to my friends at Selva BJJ and Alberto Crane’s BJJ. I am looking forward to more good times ahead, but keeping my focus on my goal – No Gi World Championships.