Check out Our Online Store

The Heart of a Champion 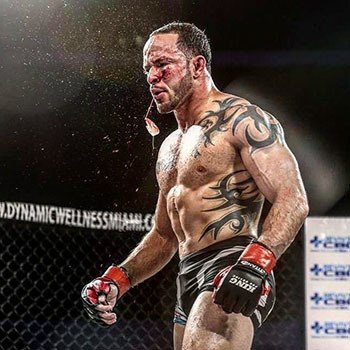 “MMA is about showing who would live and who would die in a real fight.”

In Titan FC 54, my black belt Jason “the Specimen” Soares defended his belt against Ariston Franca in the main event of the evening. As if fighting is not tough enough, he had the additional pressure of fighting in front of Dana White in his “Do you wanna fight?” series.

Jason wasted no time executing his game plan in round 1. He quickly setup his take down with strikes and brought Ariston down to the mats with a body lock reap. Ariston seemed content playing off his guard, and Jason utilized an under used weapon in MMA – body shots.

Everyone in MMA is always head hunting, especially on the ground. But body shots are a powerful tool that will wither your opponent’s defenses and will pay off in the later rounds. The pioneers of our sport, like UFC legend Mark “the Hammer” Coleman, were famous for this type of assault.

Jason paid homage to the hammer by pounding his opponent’s ribs for the remainder of the round. Rounds 2 and 3 played out the same. But, in round 2 we started to see his opponent’s guard start to break, with every punch causing the guard to open. In between rounds 2 and 3, we told Jason to pass to half guard after hitting his ribs.

Sure enough, in round 3 Jason easily passed and was working to bar the arm to pin his opponent and get a finish. Going into round 4, I was expecting the finish to come, but it didn’t go the way we expected it to. Within the first 5 seconds, Jason got caught with a HUGE knee that knocked him out…

As he was throwing a jab, Ariston caught Jason with a rear knee right below the eye that sent him slumped over to the canvas. As Ariston rushed to finish, Jason recovered and went to turtle to a defensive position. As the punches rained down on him, he kept his hands up and did a good job blocking. The referee looked very nervous and all of us were afraid of that stoppage coming in.

Ariston tried to get the back mount, which allowed Jason to nearly reverse him, but he ended up on his back in the guard. He wasted no time going for an ashi garami heel hook, forcing Ariston to defend yet again but he still retained top position. At that point Jason recovered a full guard, but he was still in danger.

Ariston was throwing a lot of small, bludgeoning blows that kept him busy but weren’t doing a lot of damage. He did stand up at one point and dropped a heavy right, but Jason took it well. But that allowed Jason to sit up and get a hold of a single leg. After a bit of struggle, he was able to switch to a double and take down Ariston to get on top again.

The roar of the crowd was deafening. TV doesn’t it do it justice, as I remember wanting to give Jason instructions but it was useless – the place was on fire and my ears were ringing. But Jason didn’t need instructions – he was still following the game plan.

He forced the half guard, barred the arm, and proceeded to fire huge bombs from his left hand to an exhausted Ariston. While the commentators were trying to get over this Rocky like recovery from Jason, they realized that Jason didn’t just recover, he knocked Ariston out cold with the punishing ground and pound.

Jason is a fighter’s fighter – a true warrior that will fight with everything he has until his last breath. While many people in the sport now are what I consider athletes, he is one of the few that takes MMA more as a trial of life and death rather than a game. In his words, “MMA is about showing who would live and who would die in a real fight.“

Some people read that and think that is hyperbole – it isn’t. The way we train our fighters physically and mentally at FFA is to prepare them for real combat. It is that spirit that makes him fight harder when most people would be tapping out and rolling over. It is easier to lose a game with minimal consequences, but when you take fighting as a life or death proposal – there is no option to lose. You either win or you die.

That is why Jason has clutched victory from the jaws of defeat several times now – he has no plans of dying. Everything about his life reflects this. He trains hard and smart to prepare for battle, he follows instructions well from his coaches, he lives a clean life style, and is in shape year round.

Furthermore, it is why he has such a high finish rate. From his perfect 13-0 record, he has 11 finishes – 3 KOs and 8 submissions. In a life or death situation, you can’t rest until your opponent is dead. So Jason is always looking to finish and make the outcome final.

That type of thought process makes it easier to have heart. Because you have no other choice. You other lay down and die, or you fight with everything you have. It is like the old adage of burning your boats.

Long ago, a general had brought his ships to a foreign land to explore and conquer it. But his men were weary and tired, wanting to return home to their previous life. He ordered his men to burn the boats once they landed. At this point, they only had two options – they either fight or they die.

People with too many options and back up plans often will resort to them when times get tough. Burning your boats makes the choice simple but painful – so you best be about that life and be ready to give it your all because you just might have to.

cool. pro mma is no office job! better get in that great ‘live or die’ mindset that Jason shows having. congrats for the nice results and thumb up for the hard work. not easy!

I agree with what you have said fighters need to commit or be prepared to pay the price of blood sweat and tears it’s a tough game .Preparation is key at those critical times congratulations to Jason a real warrior.

I think that that is a great analogy. We overcomplicate things by overthinking. That’s why I love the Yin & Yang. Light & dark. Twee & la. Equilibrium.

You fight how you train and are taught.Its that simple.Easy instruction hard to follow

Reply
Cancel
Add Your Reply
QUARANTINE SALE: Courses Up to 66% off! - Shop Now!

We use cookies to ensure that we give you the best experience on our website. If you continue to use this site we will assume that you are happy with it.OkRead more