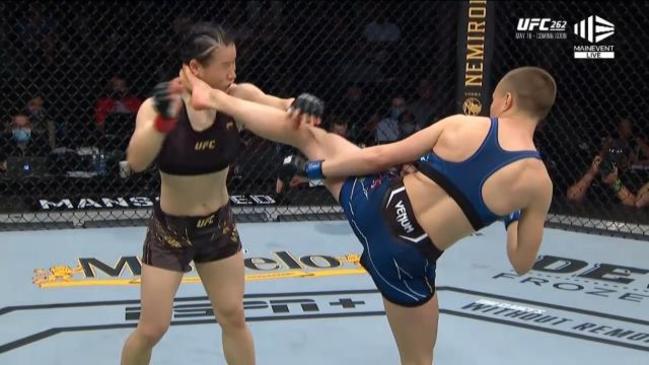 Perhaps the best moment of UFC 261 was when Pat Barry was telling “Thug” Rose Namajunas what he knew all along, that she was the best.

This was a huge moment for her psychologically. You can see how emotional she became just afterwards. The realization of a her desires coming to fruition with her beliefs was an overwhelming moment for her.

A lot of people overlook the power of positive affirmations, thinking it is just mystic mumbo jumbo that motivational speakers use to “scam” people and make money.

However, I can tell you from personal experience there is great power behind this simple exercise. I can’t think of a great athlete that I know that doesn’t use positive affirmations.

There is ABSOLUTELY NO EXCUSE to not use positive affirmations. It doesn’t cost anything, you don’t need anyone to help you do it, and it takes just a few minutes to do. But, it’s no secret that people underestimate the power of the mind. Great men and women with powerful wills are often dismissed as lucky or blessed. But all of the luck in the world doesn’t keep you at the top of the mountain – you need to WANT it and BELIEVE you are the best.

Getting yourself to believe something is a process, especially when it is so subjective. Saying you are the best in combat sports is difficult to objectively prove, especially when you aren’t the top dog. So when you first tell yourself, “you are the best,” your inner judge will hear it and cast doubt. Deep down in your subconscious, chances are you won’t believe it.

I like using the metaphor of sperm fertilizing an egg. Millions of sperm travel through in attempt to fertilize an egg, and usually all of them fail to implant. When you are lucky, one of those sperm will break through and fertilize the egg.

Similarly, when you are trying to implant a new belief into your subconscious, it requires many affirmations to break through and get yourself to believe. There is no fixed amount that I can tell you. It differs from person to person, depending on the belief.

So when you tell yourself, “you are the best,” 100 times a day every day for a year, you are increasing the odds of getting that belief implanted in your subconscious. But, not all positive affirmations are equal. Here is a hierarchy, from order of least to most effective:

It sounds easy, but when you go to tell a group of strangers you are the best fighter on the planet for the first time, chances are you will chicken out or feel silly saying out. That is because you don’t believe it yet. You don’t have any problem telling people your name, or how old you are – because you know it’s true.

My recommended protocol is to start by writing positive affirmations, and every time you write one down I will read it out loud and double up. Do at least 50 of them a day. It will take you 1 or 2 minutes. But after a month, even at just 50 repetitions daily, you will have said your affirmation to yourself at least 1400 times.

I like my egg fertilization analogy, but it isn’t entirely accurate as it’s binary. You either fertilized the egg or not, there is no middle ground. Belief is NOT binary. There are varying levels of belief. Someone with absolute believe is unwavering, where someone with a little belief can be pushed off it with pressure.

So after a month of positive affirmations, your belief will move a bit towards absolute belief. The more you believe, the more congruent your actions will be with your belief. For example, if you are telling yourself you are the best fighter in the world, chances are you can’t be eating like trash, sitting on the couch, and skipping practices – because that is not what world champion fighters do.

This is how even with a small amount of time practicing positive affirmations, it can snowball quickly. The more you believe, the more you will behave as you hope to be. When you start becoming more confident in your belief, I would then challenge yourself to share your affirmations with a trusted friend. There is great power in telling someone else your positive affirmation – especially if they accept it willingly.

Third party validation is a strong signal that your belief is valid, and your subconscious will more likely want to accept the belief. This is why I say a trusted friend. If you tell someone and they laugh at you or mock you, it is a test of your belief. If you are low in confidence, it could break you or set you back. Not always though, as some people will double down to prove their doubters wrong. But it’s a safer bet to start with good friends that build you up instead of break you down.

Over time, your confidence will grow to the point that nothing can challenge your belief. To the point you might be considered delusional. That’s a sign you have cemented the belief in your mind. Combined with the proper physical and technical preparations, you will be in a much better position to accomplish your goals.