Why are Judges in Boxing and MMA so bad? 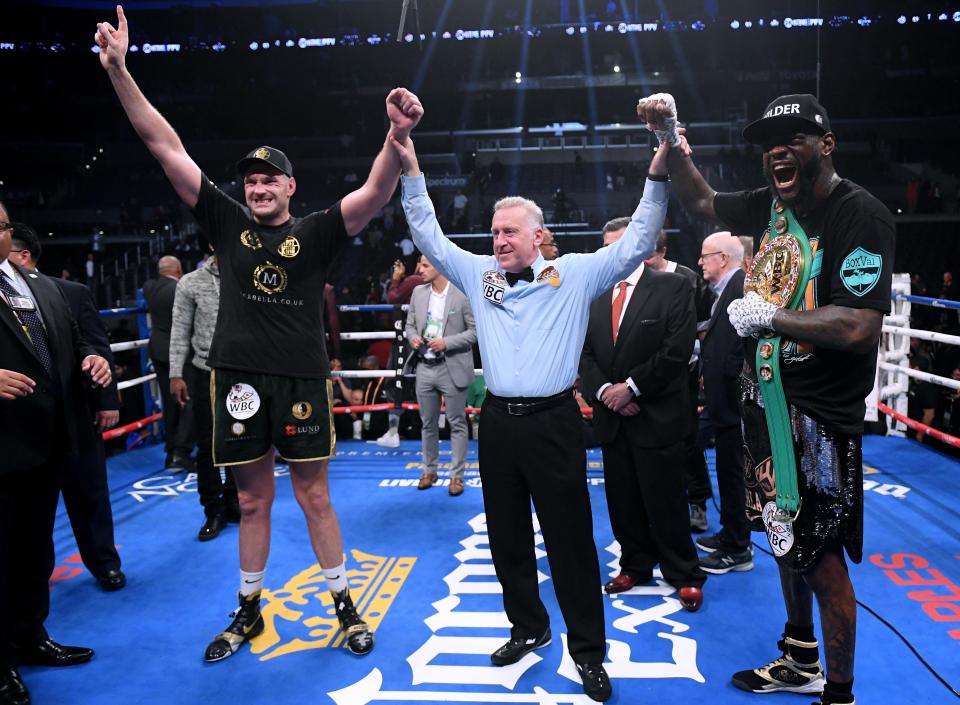 “If you are going to judge someone, you should have walked their path before or at the very least have done a lot of studying and be considered an expert.”

I’m 13 days post surgery, and while I am now able to walk without crutches and off the pain medication, I’m still working on improving my mobility – particularly bending my knee.

So this past weekend I did my homework and watched the UFC’s and the big boxing fight between Tyson Fury and Deontay Wilder.

While there is plenty of bad judging in MMA *cough, Adelaide Byrd, cough*, I think boxing has MMA beat for worst judging in combat sports 115-110. 🙂

Full disclosure: I have never seen either of these boxers fight before. I have never been a big boxing fan, and once I got into MMA I didn’t pay much attention. So I have no bias watching this fight.

That being said, it was as clear as day to me that Fury won this fight hands down. He was the better boxer in my opinion, and for such a giant man (6’9″ 256lbs) he moves incredibly well. Wilder seemed too desperate to land a KO punch, and winged nearly every right hand he threw. It’s beyond me how he weighed in at 212.5lbs at 6’7″. What is he made of, titanium? He certainly can pack a punch, the two solid connections he had floored Fury, but somehow the Gypsy King was able to shake it off and come back strong.

Many people scored it 115-111 for Fury. I have a hard time understanding anyone who thinks Wilder won. Yes he got two knock downs, but the round where he scored his first knock down could be argued that Tyson won in my opinion, as he went on the war path and Wilder was on the defensive. Kudos to both men for acting like professionals and not making a spectacle in the face of such poor judging.

But, that is just my opinion, although it seems to be the popular one as well among the experts. So for the moment, I’m going to assume I’m in the right with consensus. This begs the question:

“Why are judges in combat sports notoriously awful?”

Because the commission likes it that way.

Well think about it. They can choose ANYONE to take the position of a judge. Yet, it always seems to be people who have little to no background in the sport. Why?

It seems to me that they could easily train the judges, test them, or be more selective. But instead, we have been haunted for decades with poor judging.  Especially when they reuse judges with a notorious record of poor judging *cough, Adelaide Byrd, cough*.

Some people would say it was corrupt judges getting payed off. Perhaps, but then why would the commission keep using them if they were as upset as everyone else was about the situation? I have read the licensing documents for Nevada, and judges are not guaranteed a salary or benefits, nor do they have any obligation to provide events to judges. In other words, if they wanted to blackball you, they are in their rights to do so.

I have no idea why this would benefit the commission. Perhaps getting quality judges is more difficult than it sounds. As I mentioned there is no guarantee of work for judges in MMA or boxing, so I’m sure people are not lining up for the job, because I imagine it probably doesn’t pay well either. While you do have the best seats in the house, it’s a high pressure job since everybody is going to be judging you like me (LOL) so it doesn’t come without the drawbacks. Still, I’m sure there are people who are qualified and that are willing to take the criticism for the love of the sport. But the problem I think is integrity.

One of the conditions of being a judge is that you do not have any connections to fighters, coaches, teams, etc. Anyone with experience in training in the martial arts or boxing well naturally have ties to athletes, coaches, and teams. Perhaps that thins the pool.

But still, I would think they can work around that by not using judges that have connections to fighters on a particular card. Especially if they had more judges per fight card, instead of just 3 for the whole show. Just like they have more than one referee, they could have 6 judges, giving them a break and also making sure any connections between judges and athletes was negated.

MMA judges and referees can have a surprising amount of ignorance to the sport. When MMA started to rise like a phoenix from the ashes in the mid 2000’s, I remember going to a lot of rules meetings for MMA fights. You would have referees talking about bottom mount as a reference to guard, and a total lack of understanding of the nomenclature of submission fighting. Anecdotally, I have heard similar stories about judges when quizzed about submission holds and having no clue what they referred to.

That to me is a disgrace. If you couldn’t be considered an expert, how could you judge it? That would be like a NASA aerospace engineer getting his rocket design plans evaluated by a 6th grade algebra student. How in the hell is this kid going to understand what he is judging?

Ideally, the judge should have MORE understanding of the sport than the contestants themselves. But in combat sports, they seem to have little competence in the sport they are evaluating, which is cruel. Ideally, we would have veteran coaches and fighters judging. But alas, that is not the case.