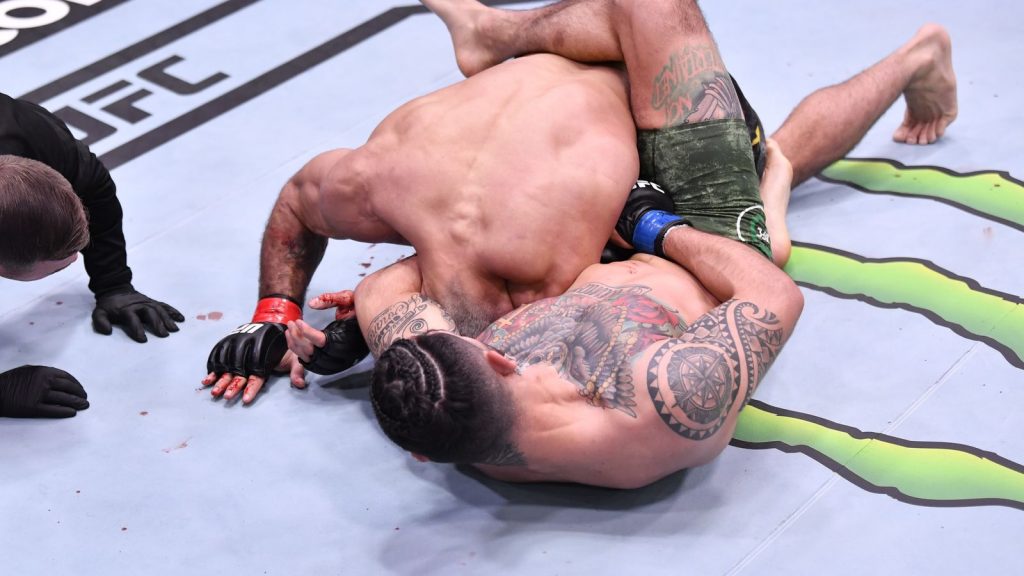 Another case of BJJ ranking not being super important in MMA, and why stress management is of utmost importance.

Rodolfo Vieira vs Anthony “Fluffy” Hernandez was considered to be a stepping stone for Vieira. Rodolfo is well known in the BJJ circles as one of the best to do it, having won multiple IBJJF black belt world titles and ADCC World Championships.

The start of the fight was a one sided affair, with Vieira scoring a quick take down and taking mount early on in a hunt for submissions.

However, Hernandez weathered the storm and got back up to his feet. This was when the tide changed, as it seemed Vieira gassed himself early looking for the early finish, and Hernandez started picking him apart.

By round 2, Rodolfo was a zombie, and Anthony was hurting him bad. Rodolfo ended up on his knees and Anthony did the unthinkable – he went for a guillotine choke on the multiple time BJJ world champion and finished him. It was the first time in history that an ADCC Champion was submitted in the UFC.

Anthony needed that win, as he lost 2 fights recently in the UFC, and losing three fights in the UFC can be a death sentence to a young fighters career.

This is why BJJ ranking doesn’t necessarily mean you are going to be an amazing MMA fighter. BJJ is just one of the many styles that modern MMA incorporates. But I don’t think technique was the determining factor here; rather, it was experience.

Rodolfo has only been fighting MMA for 4 years, with 8 fights to his record. So entering the UFC with just 5 fights was rushed in my opinion. Because you are going to face much higher level talent, and experience much more pressure than fighting in any other show.

I’m not sure what went wrong for Rodolfo, as he said he was in great shape and everything went smoothly in camp. He did confess that he had some x-factors (his grandmother passing away and his son watching his fight), which might seem trivial to outsiders, but a fighters support structure can be fragile.

We have all heard of the BJJers that won’t wash their belts and think of it as a joke. But it isn’t – at least to some people. Competitors have all sorts of coping mechanisms to deal with stress. For some it is doing a particular warm up or activity. For others, it is the people that surround them. Some competitors need to watch a particular movie, listen to a song, or wear a particular outfit to be in the zone.

It seems for Rodolfo, his grandmother was one of those supporting figures that was unfortunately no longer with him, and his newborn son was a new person in the mix watching his fight. If this was indeed the reason his mindset was off and caused him to stress much more (and hence gas out), he needs to address this in his next training camp.

We all have ways of coping with stress, and we need to make sure that we keep those systems running at 100%. Especially when we are going to battle. You don’t want to experiment with your coping mechanisms in an actual competition – because you won’t know what could happen. That is what training and mock meets are for.