With all the fouls in the UFC, is it time for new rules? 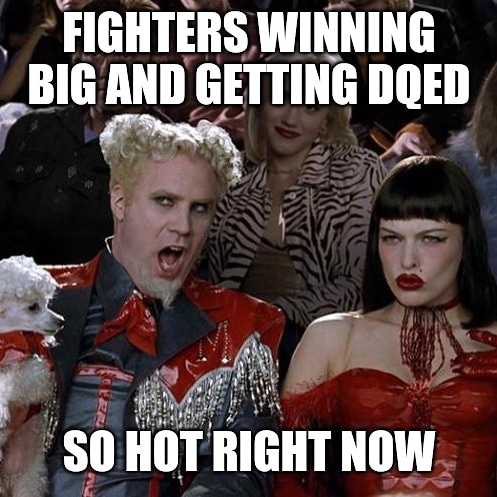 I think yes. Here is why.

The past two UFC’s had major fouls that resulted in disqualifications and no contests.

Petr Yan was the first to foul out while he was giving a beating to Aljamain Sterling for the UFC Bantamweight title. He was on his way to TKO in the 4th round, when Aljo dropped to his knees and close to being finished. That’s when Yan made a HUGE mistake – and kneed him in the head while he was grounded. The ref called the foul right away, and after 5 minutes, Sterling did not continue to fight and it was ruled a Disqualification – giving Sterling the title by DQ.

Next was Eryk Anders. He was also putting a pounding on Darren Stewart, looking close to a TKO as well. And you guessed it, he too decided to throw a knee on a grounded opponent. Darren didn’t continue, so this fight was ruled a no-contest.

Last but definitely not least was Leon Edwards. As the main event of UFC Fight Night 187, he was dominating the fight against Belal Muhammad early on entering round 2. I believe he was warned between rounds for eye gouging, as he had accidently poked Belal earlier. But that didn’t matter. He proceeded to perform one of the most gruesome eye gouges I can recall in recent memory. Not only did he eye gouge Muhammad, he also fish hooked his bottom eye lid and tore it. Poor Belal was left screaming in agony, literally crying from the amount of pain he was in. He wasn’t able to see out of his eye and the fight was stopped and ruled a no-contest as well.

Some people think Belal was playing it up, calling him a baby for sobbing. But if you have never been severely eye gouged, let me tell you, it is some of the worst pain you can experience. I have seen true bad asses that after getting eye gouged collapse on the floor and go into shock, even vomiting.

These 3 fight ending fouls transpired within 1 week of each other, costing one fighter a title and the other a title shot. What should be done about this? Is it just tragic coincidences, or something more?

Unfortunately, fouls are inevitable in the fight game. An inside leg kick can innocently be missed and hit the groin. A clinch scramble can result in a head butt and open up a massive cut. While trying to frame and push someone away a finger can graze someone’s eye.

Those types of fouls are hard to stop, but the fouls committed by these fighters didn’t fall into that category. Both of the grounded knees were not thrown instinctively or by reflex. They both were dominating, but paused because they were looking for a finishing blow to land, and for some reason chose to throw a knee instead of a punch.

It was pretty clear, at least from the viewer perspective, that both opponent’s were very grounded. So the call for the foul was well merited – I won’t dispute that at all. However, I personally think the grounded knee or kick rule is foolish and should be removed.

Much like the dreaded 12-6 elbow, the idea that a grounded knee is much more dangerous than a regular knee doesn’t make any sense. The body mechanics are almost identical to throw a knee on a downed opponent than that of an opponent bending over. In certain cases, say from a sprawl, you probably have less power because of body position.

The downed kick, I can somewhat understand the fear, but I still believe it is exaggerated. I know what they are worried about – the opponent is on his fours and the top man soccer kicks him in the head and launches it out of the cage. Except, we have seen this happen before many times and not a single decapitation. Knock outs, sure. But do you think a kick to the head from standing isn’t dangerous either?

I would love for someone to do a test of the force a fighter can generate from a soccer kick versus a classic round house kick to the head, and a front kick to the head. Because if we can use science to prove that the forces are comparable, it would take away that argument as well.

But these are all besides the point in my opinion. The reality is, that being on your fours is a dangerous position. It’s only rules like this that make being your knees favorable instead of using a guard. The moment you allow grounded knees and kicks, no smart fighter will remain on their fours. The will either scramble up to their feet or roll to their back and use a guard.

Regarding the eye gouging, it was foreseeable in this fight based on how Edwards held his hands. The referee had warned him already, because he was pointing his fingers towards Belal with open hands. As a fighter, I have never adopted a hand position with splayed fingers as my normal posture. To me, this is not so much a problem with rules or even gloves, but with the fighter. Guys like Jon Jones have repeatedly poked people in the eyes in many fights. One or two accidental eye gouges in a career is not unexpected. But with Jones, he has had at least a dozen or so eye gouges. In fact, Middle Easy even made an article with his top ten eye gouges!

Are you going to tell me that he just terrible luck? No chance.

Look above at how he is touching Rua in the face. He is holding his hands in a way that makes “accidents” happen with a much higher frequency. This is easily preventable by the fighter, by simply not pointing your fingers at your opponent. There is no advantage to that EXCEPT POKING THE EYES. If you check out that link I put above, he does this same thing to nearly everyone on the top ten list.

Edwards was executing similar hand movements, reaching and touching Belal with open hands. This of course created the opportunity for eye gouges to occur.

In my opinion, fighters that do this should be getting an immediate point deduction, and a DQ on a second or third occurrence. In that fight, that would been a DQ win for Belal using these rules. But do you think Leon would have kept that hand posture if he knew the penalty was that steep? Probably not.