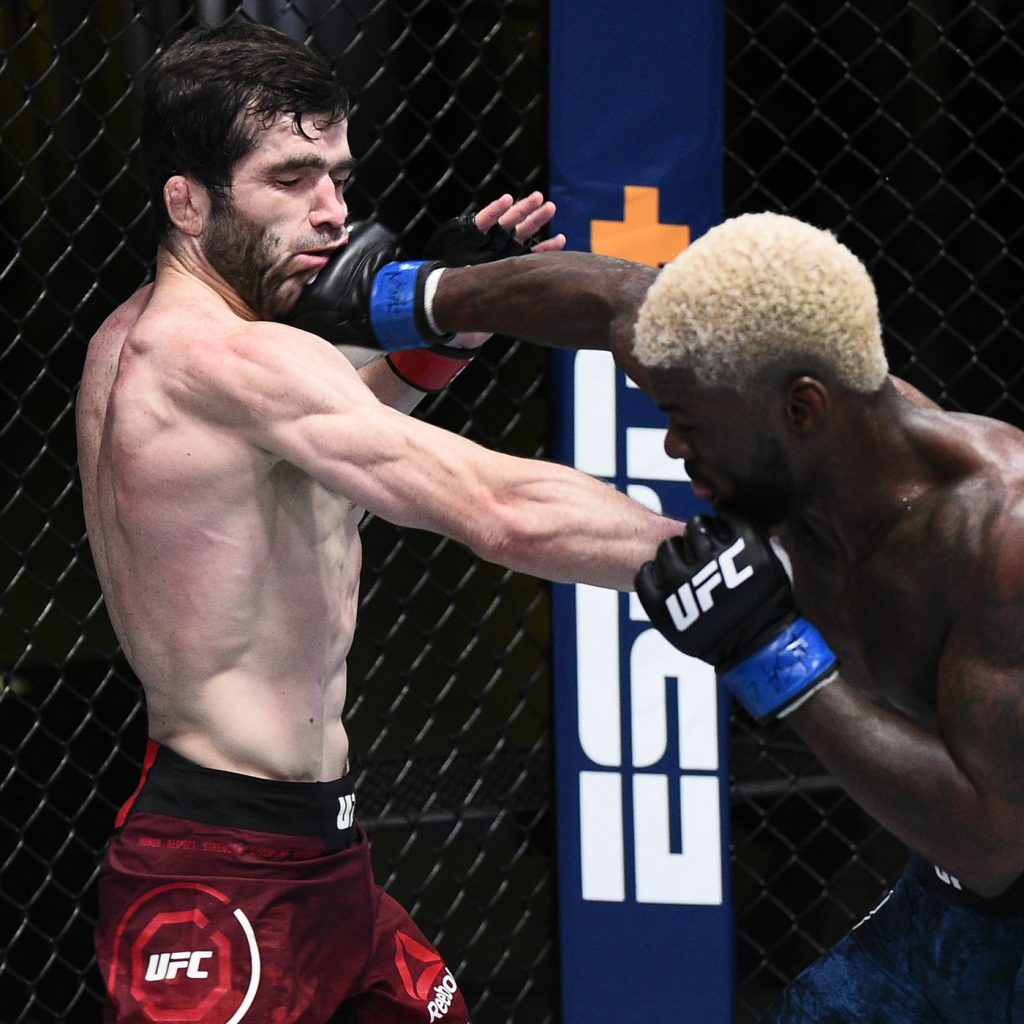 Trevin Jones (aka 5 Star) won his UFC debut with 3 days notice, as a big underdog (+450 betting odds) against the favorite, Temur “Lucky” Valiev. Some are already calling it the upset and the comeback of the year.

Trevin was nearly finished in round one, after taking a brutal teep kick to the body that dropped him, and from the sidelines it seemed like it was over. But then he got back up, despite getting hammered by the Dagestani fighter repeatedly. I saw tweets calling 5 Star a punching bag. It wasn’t looking good for 5 Star.

But Trevin showed true heart, and managed to survive a brutal barrage from Temur, and he even scored a take down to end round 1. Still, in most people’s minds, it was going to be all downhill for 5 Star.

Call it a comeback

But Jones has other plans. Despite the rocky start to the fight, in round 2 he was holding his own against Valiev. About midway through round 2, Trevin lands a clean right hook that drops Temur, and rushed in with ground and pound to get the stoppage win.

For most people, this would be an amazing story as it is, but there is more to it. In my last True Talk Tuesday post, you might recognize Trevin from the picture as he was training with me in Robert Drysdale’s Academy. He had been in Las Vegas for over a month. He didn’t have a fight lined up, and coming all the way from Guam, what was he doing in Las Vegas?

Creating a path to the UFC

He must have realized that there would be many UFC events being held in the APEX center in Las Vegas, and that if the stars lined up just right, he MIGHT get a shot in the UFC. He also has a lot of friends here in Las Vegas, being a student of Drysdale Black Belt Instructor Marcelo Nunes, and having one of his childhood friends Black belt Drew Palomo.

It takes a certain mindset to execute a plan like this, where you are relying a bit on lady luck to grace you with an opportunity. I know, as I have made this type of call on several occasions. The funny thing is, they worked out for me too.

Trevin’s opportunity took time to mature. As far as I can tell, he has been in Las Vegas since July. So over a month of waiting around here in Las Vegas, hoping for an opportunity to get a shot in the big show. But he hasn’t been idle, as he has been training, make social media call outs regularly, and doing whatever he could to be ready for that call.

Trevin wasn’t a super star before this, or had an amazing MMA record (now 13-6). So it wasn’t like he was a super hot prospect on the UFC’s radar. It took real guts to make this call and bet on himself, and I respect that immensely.

Some people might think that they could never take a chance like Trevin “5 Star” Jones did. They would risk too much, and without some security, they would fear the results of failure. But it’s precisely what they fear that they experience. Because if you never take your shot, you already failed. You just failed without trying.

I have two notable fight related experiences like this one, but I will share one with you. This one was how I got into the ADCC 2005 Submission Wrestling World Championships.

At the time, my brother and I had opened up the Freestyle Fighting Academy back in 2001, and after a few years of operation, were were losing money left and right.

We both were in college full-time, and had zero understanding of the business systems needed for a successful MMA academy (at a time where no one was running MMA academies). After I graduated in 2004, I was fortunate to get an opportunity to work with FPL as a Nuclear Operator at Turkey Point (another story of chance).

As a 24 year old, I was making more money than most people, especially being fresh out of college. But I wasn’t able to live it up, because I was spending every penny to pay debts the gym had collected. I also wasn’t able to train and compete like I wanted to (or so I told myself). I did lift a lot of weights though (as the power plant had a nice gym), so I did get strong.

As a result, I missed the ADCC North American qualifiers (which my brother entered and won). I had told my employer before they hired me, that I would need a month off in 2005 to prepare and train for the World Championships. I said that if they couldn’t accommodate that, not to hire me, because I would quit. They assured me it wouldn’t be an issue.

Six months later, my brother entered a Grapplers Quest tournament, and Brian Cimins offered for me a super fight of sorts. I would be the Pro and they would randomly pick a competitor to compete with me. If they were able to last 5 minutes, they would make $2000 dollars. If I tapped them out, I would make $500.

I was going to coach my brother regardless, so I figured, I could tap out a white or blue belt no problem, even not being in top shape. When it came my time to compete, I didn’t get some weekend warrior blue belt. My “random” opponent was none other than Mike Fowler, a young brown belt at the time that was already tearing it up on the competition scene.

My brother and I looked at each other thinking, “WTF?”

I quickly created a game plan. I would start off super slow and lethargic, to draw him in to a fall sense of comfort. I would then wait 20 seconds, and then go completely berserk and look for a finish. I figured that 1 minute of me going berserk would be all I had in my gas tank, and with my size advantage be enough to win.

I was 100% correct, and my plan worked to the T. Mike got comfortable clinching with me and at the 20 second mark, I went hard and started snapping his head like a rag doll. I was able to pull him into a head lock and drop for a guillotine choke for the win. I spoke with him afterwards, and he said he freaked out when I started spazzing.

That taste of the action motivated me a bit, and I decided to enter the next GQ Best of the West 16-Man Absolute tournament in Las Vegas a month or so later. I figured it would be a good test run for ADCC – which I still had no invite for and I had missed the qualifier. Long story short, I took second place, losing to ADCC Heavyweight Champion Jeff Monson, but beating Roy Nelson in the semi-finals was a nice win for me.

After this tournament, I realized that even though I wasn’t training like I wanted, I was still solid enough for world class competition. ADCC was also just about 2 months away if I recall correctly. I knew I needed to start a proper training camp, and needed to take that time off.

Well, that’s were things got interesting. I was training for the next position as a Nuclear Operator, and we were preparing for an exam. I told my supervisor I needed to step away as we had discussed earlier, but he told me now that I couldn’t.

At this point, my brother had connected with Lloyd Irvin and learned the business systems and implemented them in our academy. The results came quickly, with the gym turning its first profit within a few months of being mentored.

My work had also dug the gym out of debt at the same time. So being optimistic, the gym was going to finally be able to take care of itself and not need me to keep it afloat.

Leaving a high paying job for a chance of the gym paying off wasn’t easy. My parents were always very supportive, but coming from a family of engineers and lawyers, I’m sure being a martial art instructor wasn’t exactly the vision they had in mind. When I got the job at the power plant, I’m sure they felt a little more secure in my future.

What mattered to me personally was competing in ADCC – the real reason I was going to quit. But I had no invite yet. No one had emailed me, called me, or given me any clue that I would get in. So I was going to leave a solid job for the chance of getting an invite into ADCC.

I remember very clearly the day I made the decision. I had taken the exam the day before, finishing well before anyone else as I was not too concerned with grade. I walked in that day and asked my supervisor once more if he would give me the time off. He said he couldn’t, and I told him I needed to resign then. He then told me I had scored the highest in the exam, and wanted me to reconsider. I stood by my decision, shook hands, and said goodbye to everyone.

Walking to my car, I felt a certain lightness to my soul. I was beginning a new journey. Just as I entered my car, my phone rang from a number I didn’t recognize. It was Rafi Uddin, one of the ADCC coordinators, alerting me that I was being invited to ADCC at 87.9kg.

If that wasn’t a sign, I don’t know what is. Then and there I knew I had made the right decision, albeit a risky one. I do wonder sometimes if I didn’t quit, would that phone have rung?