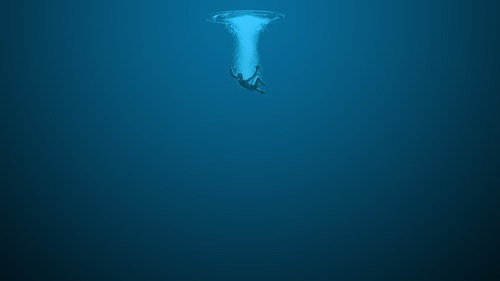 The water was very cold for a guy from Miami, at 68 degrees Fahrenheit. My breathing was deep and slow, which was all that I could hear. After swimming around for a few minutes, I felt the ocean floor once again. I could feel the current moving around me and making it very hard to navigate underwater. I had no idea how much air I had left in my tank, and I was completely alone. I was also completely blind. I was about to make a decision that would decide whether I would live or die.

It has been about 2 years since I visited the Galapagos Islands for a wonderful vacation. I stayed in Isabela, the largest but most uninhabited island of the Galapagos. It was mainly dirt roads, no building taller than 2 stories, and on the weekends, the island would run out of soda and ice cream. And despite having barely any internet or television available, on the radio you can hear people complaining that modernization is ruining their culture.

Needless to say, it was a natural paradise. Marine iguanas are strolling around all over, the occasional giant tortoise will cross your path while biking around the island, and seals taking up all the benches on the beach. Besides the amazing wild life, they also have a large volcano where the surrounding area makes you feel like you are in Mars. Truly a unique sight to behold. But the big draw is the ocean. Even at the beach, seals, penguins, turtles, sting rays, and a myriad of fish all within inches of your face. The seals will literally do circles around you and look curiously at you. I had the best snorkeling of my life here, but that was just the beginning of my underwater exploration.

This was to be my first Scuba diving trip, and it was nearly my last. I have told friends what happened to me when I was 90ft under water and they are always shocked to hear that I survived. Some of these people are veteran divers with 1,000’s of dives, others are rescue divers that dive for a living – and they told me that even experience divers would have most likely panicked and probably died as a result. Yet, I had just got certified to dive 2 weeks before and was on my 8th dive when a near death experience came my way. They all said the same thing to me:

It was the last dive of the trip. My previous dives went smoothly and were a lot of fun. Even though the Galapagos is usually reserved for veteran divers because of the strong currents, we didn’t have any problems. My last dive was to be in a group of 6 including the dive master leading the dive. My partner was also a new diver like me and I made sure to tell the dive master to look out for us since we were newbies.

The dive started off with no problems. After about 20 minutes or so under water, we approached an overhanging cliff. I know we were deep at this point, but I had no idea how deep, because my rental gear’s depth gauge was broken. As we went under this overhanging cliff, my vision began to blur. I thought at first it was just my googles and tried adjusting them a little, but my vision got very blurry. I immediately went to grab my partner but she was just out of reach. Then my vision faded to black.

I was fully conscious and lucid, but I had no vision whatsoever. I immediately reached for my flash light and started waving it in front of me back and forth to try and get someones attention. After a minute of doing this, I realized I was the last person in the group and more than likely no one could see me. I was also unsure if I was still under the cliff, and perhaps it was obstructing them from seeing me.

When you are blind under water, knowing what is up and down is pretty much impossible. Nevertheless, I tried to swim to what I considered was up at a slow pace and hope someone was able to spot me. I did this for what I imagine was another minute until I felt the ocean floor at my feet. With the current moving me around, it was going to make this pretty much impossible to do.

I stopped doing everything. I focused on breathing deeply, and thought about my situation. I was already in the water for nearly 30 minutes. Because I am the biggest guy in the group, I usually use up all my air before everyone else – between 30-45 minutes. So I don’t have time to wait for anyone to find me. That means I have to surface. I didn’t know what depth I was at, and surfacing without doing safety stops is very dangerous. Without vision, there is no way I can do a safety stop, so that puts me at risk for decompression sickness even if I could swim my way up somehow.

There was a way to get to the surface easily though – just fill up my BCD (Buoyancy Control Device) with air. The only problem is that I will shoot up like a rocket and have serious health issues. Since we are 45 minutes away from shore (and even that is pretty much in the middle of nowhere), I do not think they have the type of healthcare facilities I would need to properly deal with this. But, at this point my options are simple: drown at the bottom of the ocean or risk major bodily harm and possibly die on the surface.

I made my decision – I was going to fill up my BCD and risk the rapid ascent to the surface. But before I pushed the button to inflate my BCD, something told me to take my mask off first. I felt pressure on my eyes, and it was very uncomfortable. I removed my mask, and then put it back on and cleared the water from it.

I opened my eyes and was treated to a very blurry view of the ocean floor. This changed everything. I spent the next few minutes trying to find my group as I slowly worked my way to the surface. But I couldn’t see any one. So now it was time to surface. Even though I couldn’t read anything, I could easily eye ball what 15 ft from the surface was more or less, and do a proper safety stop.

After doing a safety stop, I surfaced and looked around for our dive boat. After turning in a full 360 degrees, I finally saw the boat and waved to them. They were pretty far out, and it was futile to call out to them. After a minute of waving my hand in the air, someone on the boat spotted me. They seemed to not understand the situation at all. Normally, when someone waves at a boat in the water, the boat picks them up. However, the boat just kept pointing in the opposite direction.

When I turned around I saw a buoy in the distance. This buoy was attached to the dive master, so I went ahead and swam towards it and descended. It took me a couple of minutes to reach the group, and it was clear that none of them even realized I was missing. When my partner saw me, I can tell she was surprised. The dive master then motioned for me to stay at the safety stop until I ran out of air, which was only a few minutes after the whole ordeal.

After surfacing and getting on the boat, the crew helped me take my gear off. They all looked at me funny so I knew something was wrong with my face. I went to a mirror and saw that my eyes were very puffy, and my vision was still blurry. It reminded me of the original Total Recall where Arnold’s eyes were popping out of their sockets in Mars. Fortunately, the swelling reduced and my vision restored itself over the next few hours.

When I was 25, I had a short stint as a Nuclear Field Operator at FPL. That is the job just beneath Homer Simpson. The irony in having the most simple minded cartoon character taking on one of the most important and stressful jobs was truly appreciated by me then. I mention this because it was a prerequisite to understand disaster scenarios and understand how a catastrophe happens. The funny thing is that a disaster is almost NEVER the result of one mistake. In fact, disasters occur after a series of mistakes cascade together into a perfect storm.

So looking back at this incident, I can tell you all the “little” things that went wrong that could have cost me my life.

At the end of the day, I learned a lot from this experience. I would be lying if I didn’t say I was scared of diving again. When I would close my eyes to sleep the next few nights, I could hear the sound of the ocean and my breathing again. It was more stressful reliving the event rather than being in it, realizing how close I was to serious bodily harm.

The very next thing I did was get certified as an advanced open water diver, and have since logged in about 60 dives or so. I wanted to squash any trepidation moving forward, and properly prepare myself for the worst case scenarios. I actually have a trip setup in November on a luxury dive boat in the Maldives that I am looking forward to.

What a second. How did martial arts save your life?

That is what all my diving friends told me. They attributed my calm, rational thinking process to being what spared me. What ends up getting people in trouble under water is panicking. You start breathing to fast and use up air more rapidly, you might freeze up and not do anything from fear, or make rash decisions with severe consequences.

However, I am no stranger to dangerous positions. Whether that is good or bad, I am not sure – lol!

I have famously been injured, been put to sleep, and battled my way out of many tough spots in competitions. In none of those situations was I ever panicked. I was always thinking of a way out. More often than not I was able to escape, although sometimes I didn’t, lol! Point being, I stood a much higher chance by staying level headed in situations that required improvisation to escape.

Training with submissions really allows you to deal with high stress situations with a rational approach. I believe that is also what allowed me to survive that ordeal, but I also make it a point to tell my friends about this just in case they decide to dive. I wouldn’t want anyone to have to deal with that situation without knowing what to do. So I hope this story helps brings some awareness to dive safety, a reason to stay cool under pressure, and help you warn a friend that dives. 🙂