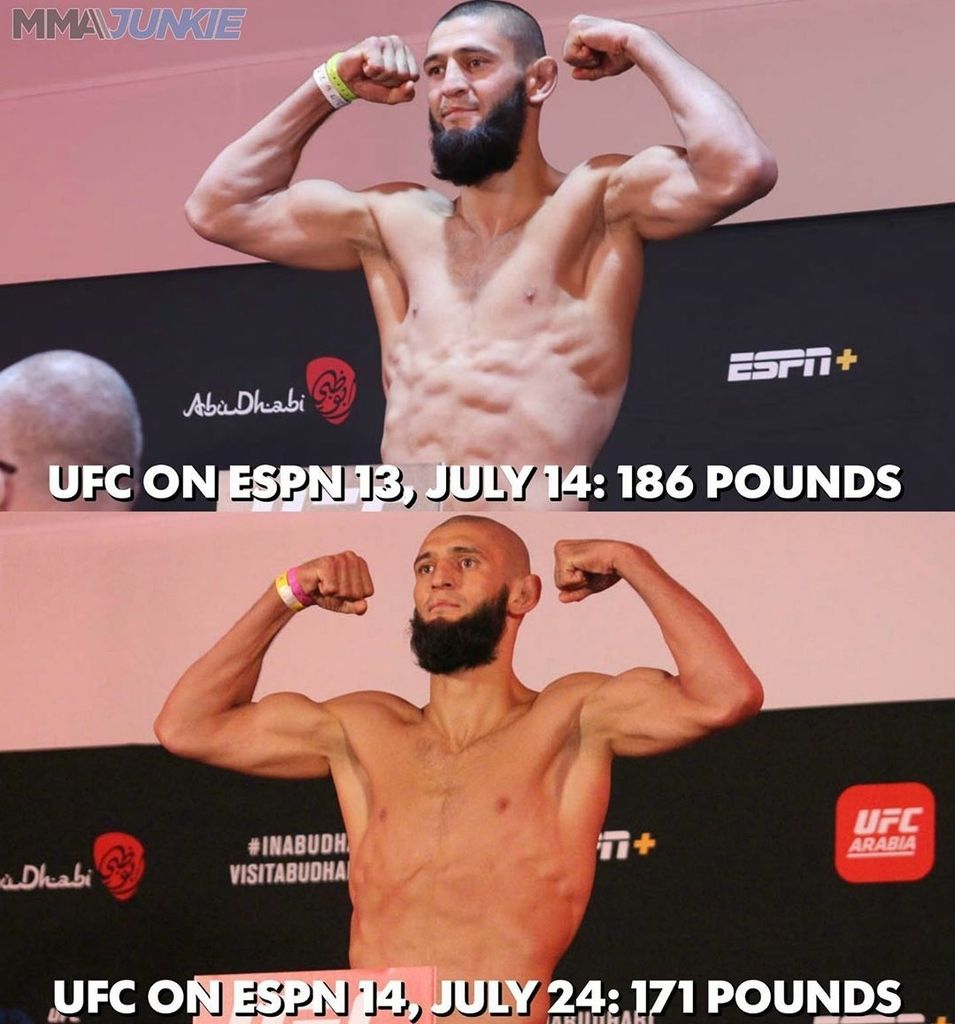 Over the past 2 weeks, Khamzat Chimaev did something amazing.

First, he made his UFC Debut as a middleweight on UFC Fight Night 172 against John Phillips and won by submission – out striking his opponent 124 to 2.

Then, he fought again on UFC Fight Night 174 against Rhys McKee just 10 days later, as a WELTERWEIGHT, and won by TKO – landing 68 to 0 in strikes.

First off, making a UFC debut is tough. Khamzat only had 6 fights on his record before this, which is relatively little experience in the MMA world. But he showed great composure in his fights, and only took 2 strikes!

That was impressive, but more impressive to me is that he came back 10 days later, at a lower weight class. That was a 15 pound cut, to a fighter that is already shredded. But once again, he proved it was no fluke as he steam rolled through McKee in the first round, not getting hit a single time.

He now has a perfect 8-0 record with 8 finishes. You know Dana White is going to love this kid, because he is down to fight whoever, whenever, at whatever weight class – lol!

While it’s a bit early to get on board the Khamzat Express, it’s fair to say he has earned a good amount of respect for his work in the past 2 weeks. Clearly, he believes in striking while the iron is hot. 🙂

Personally, I’m just amazed on how he managed the weight cut. I mean look at him.

The guy is very lean on the top picture already, and managed to squeeze out 15 pounds and get a solid tan just 10 days later (joking about the tan of course).

Turns out he normally fights at 170lbs, so likely he didn’t have to cut as much I suppose to make 185lbs. Contrary to what some people may think, being leaner makes it easier to cut weight, as the more muscle you have, the more water weight you can shed.

Fat doesn’t hold water, so the more of it you have (versus muscle), the less water weight you can cut. Instead, you have to diet your weight off, which is much more difficult.

Dieting to lose fat requires creating a calorie deficit, which in itself is a challenge, as you will be hungry all day. When you add a fighter’s training regiment on top of that, it is horrible. You will feel weaker, have less energy, and as a result not be able to have top quality training.

Compared to someone who is already lean and just has to cut water weight, the dieter is going to have a worse training camp. The guy doing the water cut will be training at top performance levels, as he will be eating healthy. He only has to dial in the diet in the last 2 weeks to manage sodium levels, and particularly the final week. The dieter will have to manage diminishing energy levels and performance all camp long, and then have to do the water cut on top of that.

This goes to show you that always being in shape pays off. Especially as a fighter trying to break through the ranks. Being in shape year round and staying in a state of readiness is going to give you a lot more opportunities in the fight world.