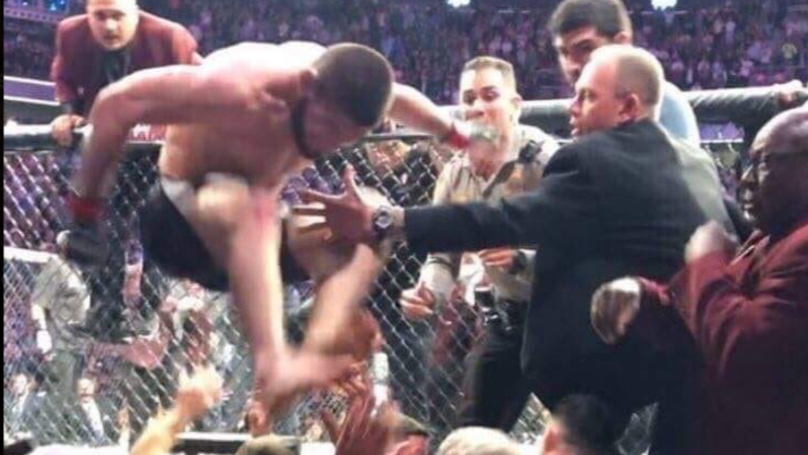 Set standards and apply them consistently.

UFC 229 came in with a ton of hype and an unprecedented marketing strategy – promote what could have been felony assault and what would have suspended any other sports athlete and instead make it the focus of your biggest event to date.

It didn’t disappoint. A lot of great fights, with video of Conor McGregor throwing a dolly into a bus between fights to hype up the main event. The main event ended as it started, with more criminal behavior that caused the show to end abruptly.

I posted about this on my social media as it happened and was met with much more opposition than I expected. If you have been in a cave for the past 72 hours, here is a quick summary:

When we have MMA super stars and world champions acting like street thugs by talking trash and getting into fights outside the cage, it tarnishes what the martial arts are supposed to stand for. They show no self control or respect. As ambassadors of the martial arts, they do all of us a disservice by acting the way they did.

While both Conor McGregor and Khabib Nurmagomedov are responsible for their actions in this mess, one player arguably plays a bigger role – the UFC (Ultimate Fighting Championship). At any point, they could have pulled the plug on this and prevent it from escalating. But, they were too busy seeing tabloids promoting the shenanigans and thinking of all the PPV sales they would make.

What’s more upsetting to me, is that Dana White has said they could not do anything to stop this. That is a load of crap.

This “beef” between Conor’s camp and Khabib’s camp is now over 1 year old. If they really wanted to kill each other, do you think they had to wait so long to get in the octagon to handle it? Of course not! Conor could have taken his private jet and flown to Khabib and fought him on the streets if he was a true gangster and was going to “keep it real”.

But he isn’t – and neither is Khabib. They wanted to get paid. Big time. While I think Conor is more of an “actor” and just doing whatever it takes to market himself, I think Khabib was truly offended and took it very personally (understandably so). STILL, even he didn’t risk his payday to defend his honor.

If the UFC would have taken severe actions against Conor and his crew after the Bus vs Dolly incident, this whole fiasco would have never happened. Imagine if Dana had suspended Conor for 2 years, and fined him a very large sum. Do you think he would have continued his antics?

I would bet not. Not fighting for 2 years would take away some of his prime years out of his career, not to mention whatever amount he was fined. While someone in Conor’s position as the top earner in MMA could perhaps justify it if it made a money fight happen in the future, even he would have to think twice about it. Most fighters would not be able to take such a hit in stride. Such an example would have set a precedent and draw a line in the sand on how far fighters can sink into the gutter.

But you would have to be consistent with the application of the rules, and this is a big problem for the UFC. With the dolly incident, Conor was given a slap in the wrist while Artem was pulled from his fight (and hasn’t fought since). With the most recent incident, Khabib’s corner men were given lifetime bans from the UFC, while Khabib remains the champion.

I can guarantee that if this same situation happened to an undercard fighter, they would have been dropped without hesitation from the UFC. But when it is a headliner, the application of the rules and standards differs. This type of flip flopping is terrible for the sport.

Hence my point: Set standards and apply them consistently. I haven’t signed a Zuffa contract since 2008, so I’m sure a lot has changed. But I would hope there must be a code of ethics that athletes must abide by as ambassadors of the UFC. I would imagine that they would have to dictate the penalties for a breach of this agreement, which may be a combination of monetary fines and suspension. If there isn’t, there should be.

The fact of the matter is that the UFC has control of the situation. Dana acting like he has no control is bogus. He controls the money, hence he controls the fighters. Sure a guy can act a fool with no warning. But after he does, you can punish him. But when your organization has a track record for letting people off the hook if they bring in a lot of money, then everyone is going to follow that model.

I think it’s obvious that I am not a fan of Conor McGregor’s antics outside the cage. Yes, it is a very effective marketing strategy. As humans, we are easily drawn to negativity. If a stranger shakes your hand, you can easily forget him. But if he slaps in your face, you will remember him. LOL!

Conor is constantly slapping people in the face – metaphorically, but if you are a bus literally. 🙂

So he is going to get everyone’s attention easily. Does that make it acceptable though? I think not. We could do a lot of things to get more attention. The UFC could make the rings girls go topless, or get celebrities like Logan Paul to fight people in the UFC, which would probably get more people to watch. But at what point do we draw the line? Is the UFC just going to sell out for whatever brings in more money?

Perhaps I’m an idealist and too old-fashioned. I have had people say that I’m “soft” for not embracing the thug life. In my view, letting someone get under your skin because he taunted you with words is “soft.” It means your ego is too fragile to handle some verbal abuse.

I respect fighters like Georges St. Pierre and Demain Maia. They brought respect and class to the sport. Perhaps it is not as marketable, but they let their skills do the talking.

At the end of the day, we all vote on what will make money with our wallets. Unfortunately, I don’t see the trend of trash talkers ending any time soon. But at the very least, let’s not make a total mockery of the martial arts by going full thug and fighting outside the cage.