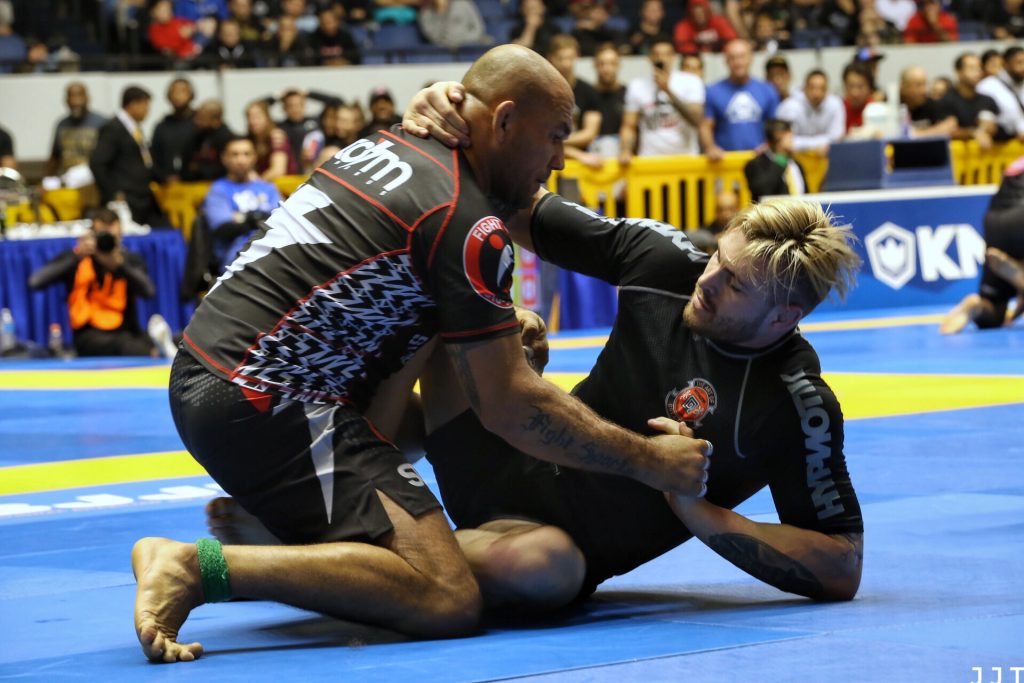 “Always keep your composure. You can’t score from the penalty box; and to win, you have to score.”

So if you have been on social media this weekend, chances are you have read that Gordon Ryan has won double gold in the IBJJF No Gi World Championships in the Ultra Heavyweight and Absolute divisions.

It wasn’t without controversy of course. His Ultra Heavyweight finals match with Roberto “Cyborg” Abreu was a stall fest – nearly 10 minutes of Gordon butt scooting towards Cyborg, while Cyborg continuously disengaged by pushing away, circling, and using a heavy handed collar tie (akin to a hard wrestling head club).

Cyborg was given 3 warnings, giving Gordon 1 advantage and 2 points due to penalties. You can hear Cyborg’s corner telling him to engage and attack, but he never seemed to get a real attack put together. Gordon scooted all over trying to pull Cyborg over him to work sweeps, but never had any success. At the end, Cyborg was disqualified with less than 10 seconds on the clock for his stalling.

What’s crazy about this situation was Cyborg had this exact match happen before – except he was the one scooting after Brendan Schaub. All sorts of mockery and memes were created in the aftermath, going as far as to call the tactic the #SchaubShutdown LOL! So to see Cyborg employ the same tactic against a fellow opponent seems absurd.

So why did this happen?

We haven’t got a definitive answer, but I believe I can make an educated guess. At the end of the match, Cyborg didn’t go to shake hands with Gordon, and on social media posted that he wasn’t going to give respect to Gordon when respect was not given to him. He alluded to Gordon “talking shit” and hoping he would change and be more humble.

I have looked through Gordon’s Instagram, and it doesn’t contain anything specifically towards Cyborg beforehand that I can find. Just his usual bold claims about being the King and telling people to step down. Hardly anything to take serious offence with in my opinion. But perhaps he posted something temporary (in a story or Snapchat), messaged Cyborg privately, or spoke trash to him in person. All quite possible.

Regardless, it appears to me that Cyborg lost his composure. He is normally a very aggressive and dynamic grappler. You can see highlights of his matches early in the tournament were action packed. It is a complete 180 to what we saw with his match with Gordon.

I should know, I have grappled against Cyborg back in the ADCC 2009 World Championships Absolute division. To say I had my hands full would be an understatement. I was fortunate to win that match by a referees decision in a close contest, yet he was still humble in defeat. I have also trained with him on several occasions, shared meals, hung out with him,  and through and through he was a nice guy.

So this behavior is not typical of the man I have known. But when one loses their composure, their character can go out the window. Someone who is normally rational can become an emotional mess.

I have to assume that their was something that happened outside of public view to cause this break in composure. Perhaps his loss to Gordon in ADCC a year ago also hung heavy on Cyborg. Either way, losing his composure cost him a world title, and possibly fans.

What causes someone to lose their composure?

A strong emotional response. Fear can break a person and cause them to panic and take drastic actions or freeze and take no action. Anger can cause someone to lose it and become destructive. Frustration can make people give up and just throw their hands up in the air.

Everyone has their self imposed limits of how much abuse they can take before they snap. Make fun of them all you want, but the moment you make a bad “yo momma” joke and you are dead. 🙂

Whatever that line is, if your opponent’s know how to cross it, they can break you before the match has even started. Mental warfare is a key aspect to battle and ignoring it would be a folly. Every fighter has to engage in the stare down, press conferences, and social media engagement. If you do not know how to handle these social pressures, you can be on the losing end of the battle of the mind.

Keep in mind, mental warfare doesn’t just mean trash talking. To me, that is the lowest form of mental warfare, and only someone with a fragile ego and low threshold for emotional abuse would be beat by this.

The bigger part of mental warfare is unspoken – the aura projected by an individual and how it is perceived. This aura is a manifestation of a person’s confidence and belief in themselves. It’s hard (but not impossible) to fake. When fighters do the stare down, being able to look your opponent face to face is a test of this. If you are able to stare without flinching, it is a sign of confidence. If you can’t keep a stare, this is seen as a sign of weakness. If you don’t look at all, it’s inconclusive. Fedor doesnt play stare downs and I think he is quite good. 🙂

Other things that can disrupt the mind game are uncontrolled events. You lose your favorite mouth guard, have a dispute with a significant other, have a change of venue, etc. Combat is stressful enough, so having an element of control of your surroundings helps cement yourself, but when those things start to fall apart it can be a big problem.

These are just a few things that break your composure, but the bottom line is that you need thicker skin. Nothing should rattle your cage. Your confidence and belief in yourself needs to be absolute, to the point that people think you are delusional. People who have achieved greatness are known for doing the impossible – not doing what is expected.

Someone with absolute belief does not get fazed. There is nothing that anyone can say that would change their mind because their belief comes from within. It sounds crazy because it is in a way. But that’s the point. Otherwise, if you base your belief on external elements you are a victim to them. When they change (and undoubtedly they will), your belief will be shaken.

Most people do NOT think this way, because they are ironically afraid of the criticism they would receive by being unfazeable. I will close by using another quote:

“Wolves don’t lose sleep over the opinions of sheep.”

By the way, if you want to learn how to develop a steel resolve and be mentally tough, look no further than my brother’s course, Black Belt Psychology. It’s currently on sale at FFAcoach for Christmas at 20% off, so make sure you check it out: