Getting Kicked While You Are Down 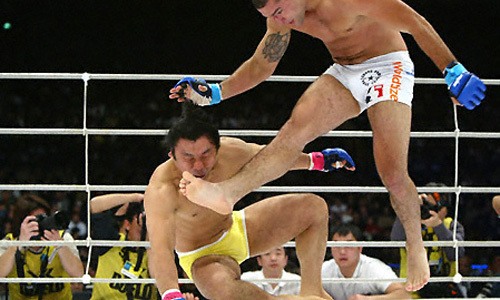 It would be if I was in the UFC octagon, but in this case I’m talking metaphorically about life. 🙂

Last week I split my head open, sprained my wrist badly, and tweaked my back – all while trying to recover and get back to 100% function from my knee surgery.

Not cool. How did you do it?

Short answer – being stupid. But here is a play-by-play:

It started with getting a new car. I went 21st century and ordered a car from Carvana, which was a really awesome experience. No BS sales experience, fair pricing, great guarantee options, and quick delivery of your car to your home.

If you are interested, they actually gave me $500 dollar off coupons for referrals, so send me an email (my brother give me his and that was a nice bonus).

Anyhow, I was excited about the new ride and was picking up some stuff to put in the car, and bent over a shelf and popped up quickly – forgetting about the shelf. I’m managed to crack myself on top of the head on the corner, and blood started dripping down my head immediately.

I rarely get upset, but that was really upsetting. Not only is this a stupid way to get injured, the headache that ensued just reminded for the next few hours of my stupidity, not making the situation any better. LOL!

The following day, I was finishing out the final workout of 3 Prong Strong routine from Jim Stoppani, and was doing a straight arm pull down. Simple, easy exercise that doesn’t really stress anything major. What could go wrong?

On the final rep mid way down, I felt a loud pop in the middle of my right wrist. My form was solid and the wrist was in neutral position, so I have no idea how I injured it. For a second I thought maybe it was just a random pop like cracking a knuckle. But then pain and stiffness joined the party, and then I knew I was in for a bad time.

I gave that a few days rest, and then went to train jiu jitsu for the first time in a few weeks. I quickly realized my wrist was going to be a problem, as any attempts to grab were futile. Even locking a Kimura I had to release it immediately because I was hurting myself instead of my opponent, lol.

I did my best to protect it, but I still ended up hurting in more. In the process, I went for a saddle entry from bottom that ended up tweaking my back, as it was too much of a twist for me. Something I should have known, since the last few times I attempted that entry I had the same result.

So, what did I learn?

First, don’t move in a rush. Being excited, nervous, or otherwise frantic and high speed do not work well. You move faster than you are thinking and make mistakes.

Second, despite your best efforts to be safe, you can still get hurt inexplicably. Once you are hurt, be smart and take care of it accordingly. In this case, I should have gotten a wrist brace immediately. I only did this a week later, and the brace made weight training a whole lot easier. Likewise, I shouldn’t have trained grappling until the wrist was healed, as I just pissed it off more LOL.

Finally, I need to stop going for bottom saddle entries from a reverse half guard. Every time I do it I get jacked up. It is so tempting, because it is an easy position for me to get into. But my lower back and hamstrings are too tight, and not allowing me to do the move effectively. I need to either stop doing it, or work on my flexibility a lot so I can get into that position without hurting myself. Probably both.

These are simple lessons that I should have learned by now, but sometimes you need to hit your head on the wall until you bleed to realize the damage you are doing it.

Dumb people won’t learn from their mistakes. Smart people can learn after several failed attempts. Smarter people learn after the first time. The smartest people can learn by observing other’s failures. Geniuses can logically deduce the outcome of a particular situation without seeing it happen real life.

So in this case, I hope just to be smart, for you to be smarter, and for some geniuses to chime in on corrections to future errors I may make in advance. 🙂