Did Diego Sanchez Take The Easy Way Out? 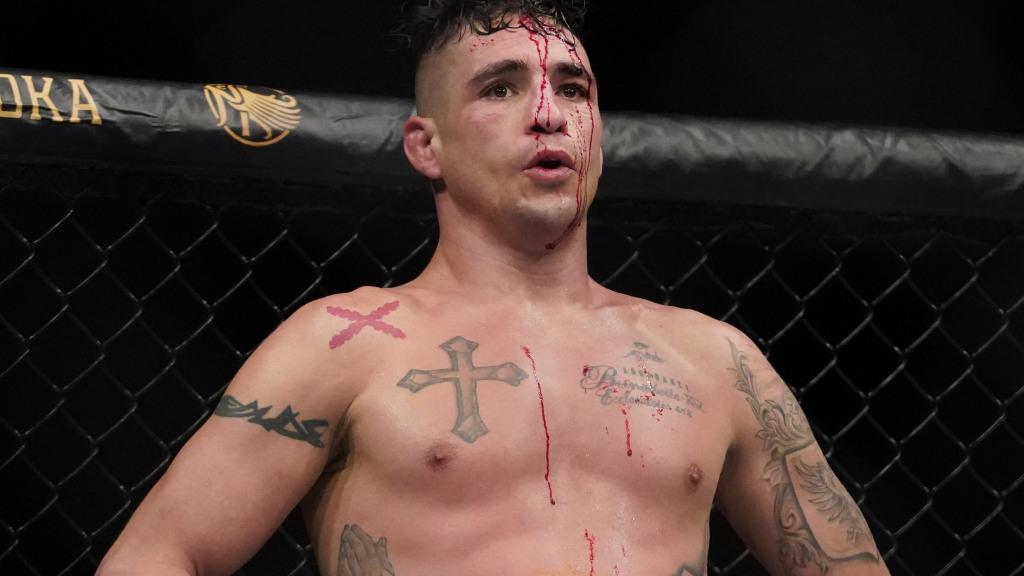 Spoiler Alert: in UFC Fight Night 167, Diego Sanchez won by disqualification against Michel Pereira in the third round due to a knee on a grounded opponent.

By all accounts, Diego was on the ass end of an ass beating. In the final sequence, Diego was dropped by legal knees to the body, followed by a knee to the head that was not legal. It did not appear intentional, as Michel was throwing a series of knees, just bad timing.

The ref jumped in immediately to call the foul and Diego got up immediately. That knee opened up cut on his forehead, and after sometime Diego said he could not continue and the fight was stopped and ruled a DQ win for Diego.

In the aftermath, many people were upset with this call and felt Diego was being a punk (putting it very mildly lol) for not continuing to fight and showed a lack of warrior spirit. On the other side. people defended him by saying he just got a win and double the prize money, so it was a smart business decision. And on another side of the triangular debate are people who defend the action based no his health and safety.

Which side do I fall in?

All of them. They are all right. It does show a lack of warrior spirit. It is a smart business decision. It does protect his health and safety.

Let me clarify the warrior spirit, as this is the biggest point of contention. To make clear what I mean by warrior, I use this breakdown:

A sportsman is someone who practices sports for recreation. When he gets tired, he quits.

An athlete is someone who practices sports professional. He is able to push beyond fatigue. When he gets physically injured, he quits.

A warrior is someone who lives to compete. He is able to push beyond fatigue and pain. When his heart stops beating, he quits.

Those are my definitions. So by that standard, Diego showed up as an athlete, or did he?

What is the point of a fight? Ultimately, it is to win. In this fight, there didn’t seem a path for Diego to win by using his fighting skills. His was outmatched by his own admission. But then this foul happened, and he was given an opportunity to get a win. Whose to say that wasn’t the smart move?

While I can see the ultimate outcome he got was attained, the means by which he got it doesn’t sit well with me. I’m trying to find a way to defend it, but it’s hard. Fighters have a code of honor we are supposed to fight by, and taking a DQ win when you can continue to fight is like being a tattle-tail.

One thing that makes this harder to figure out is the foul. No one can truly understand Diego’s actual physical condition except Diego. He was already badly hurt from knees to the body, which put him down to a knee, and the knee to the head seemed to make him collapse.

However, he quickly popped up to his feet and seemed very present when the referee came in. From the outsider view, he looked as good as can be expected.

In the fight world, fouls happen all the time. It is rare for a fighter to accept a DQ win from a foul. Even though fighting through a foul isn’t fair to them, they accept it and fight anyways. We have come to expect that. Especially when a foul is accidental.

Fans might think that a few minutes of rest makes the foul disappear, but it doesn’t. A good kick to the nuts isn’t going to go away. You will lose some agility in your legs. A good eye gouge will cause severe pain, and degrees of visual impairment. A shot to the back of the head will shut your lights off quickly, and with head trauma it’s hard to know what the consequences will be.

Even still, a warrior will continue to fight despite the odds. This is where having a good coach comes handy, as they are the one that will step in to protect their fighter from themselves. A warrior doesn’t know how to quit, it is not an option.

So I’m conflicted. The good news is that my opinion, or anyone else’s shouldn’t matter to Diego. Only his opinion of himself should matter.