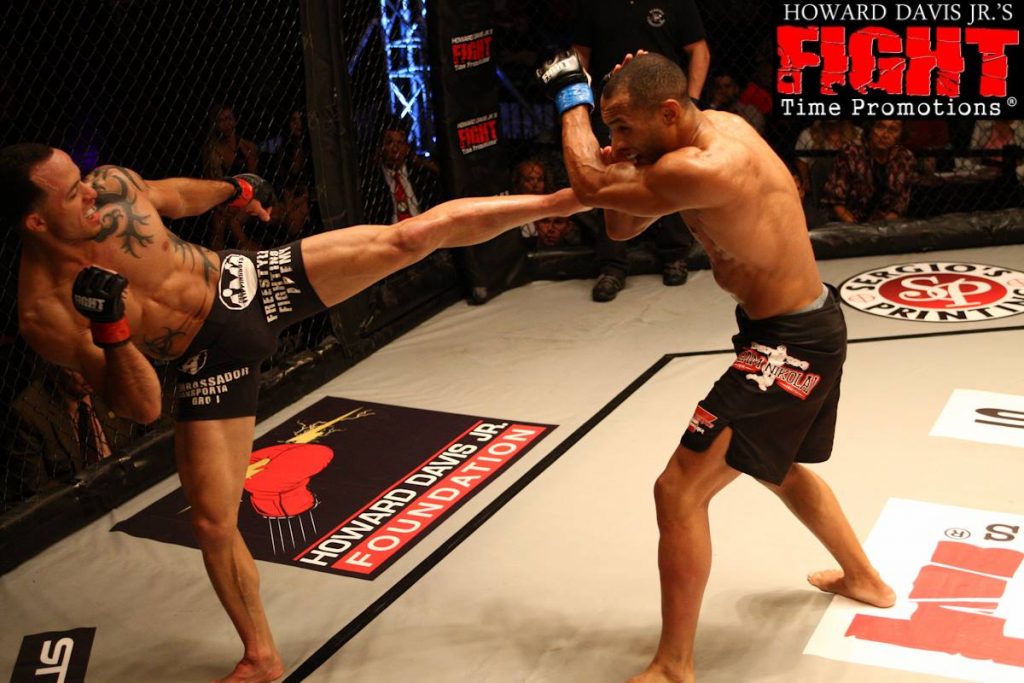 One of my fighters had a hell of a fight last night that pushed him to the edge. Jason Soares is a black belt from my brother and I and he was defending his featherweight title against a very game Guilherme Faria from Brazil.

Jason is known for his grappling game, as he has 7 submissions out of his 9 victories. However, he proved last night that his stand up game is legit. Faria, 15-5 as a pro, is a dangerous striker with 8 KOs and was going to be a test for Jason to get through.

The first 3 rounds played out as a tactical striking battle, with Jason getting the better of the rounds with superior low kicks and great defense. However, towards the end of the third round Jason attempted a shot that Faria sprawled hard on. Little did everyone know that the sprawl had dislocated Jason’s right shoulder.

My brother told Jason to avoid grappling and just keep working his kicks and left hook. He was confident they had the first 3 rounds, and even if they lost the next 2 rounds they would still retain the belt. The main concern was not putting Jason in bad position where his injury could lose the fight.

The fourth round started off good, with Jason peppering Faria with more kicks and hooks. But Faria threw a barrage of punches that backed up Jason into the fence. Jason wisely pulled guard at that point, and Faria threw a few punches before backing off. Jason had to resort to this tactic several times which looked bad scoring was, as the commentators seemed to think he was rocked by strikes. However, he was able to make it into round 5.

In the fifth round, Jason’s leg kicks finally paid off. Jason was using very low leg kicks, attacking the calf muscle. He blasted his opponent with one kick that had his opponent on roller skates. So much that his opponent had to switch stance. I was hopeful that we could chop him down and look for a finish, but even with one good leg Faria was still very dangerous, nearly landing some big bombs.

At one point, Jason caught a leg and rolled for a leg lock on Faria, but he was able to defend it. This time he engaged in Jason’s guard and landed some good elbows. Jason was hunting for arm bars, but Faria was able to back off and restart from the fight. A few more strikes exchanged before Faria pressured Jason again and finished the round on top as Jason was securing a triangle choke.

Incredibly, Jason had fought 10 minutes with a dislocated shoulder. Somehow, his opponent was oblivious to that, probably because Jason had a great poker face and never let on how hurt he really was.

But the real question was how would the judges see it? The first 3 rounds I felt Jason won, but even those were close. The fourth was clearly Faria’s, and the fifth Faria stole at the end. 48-47 Jason was the best case scenario for us.

I awaited the judges decision knowing that regardless of the outcome, Jason had won already. This experience was exactly the type of challenge he needed to continue to grow as a fighter. Not only was the fight almost entirely a stand up battle, but he also had to deal with adversity by fighting with a dislocated shoulder. If you know Jason though, that is hardly surprising – he is as tough as they come. He has dealt with much more problems than that and come out on top.

The judges rendered their decision:

The MMA gods favored us that day and Jason was declared the winner in a unanimous decision 48-47. He advanced to a perfect 10-0 record as a pro. I am very proud of him and his performance yesterday. These are the types of fights that define you, and today if we looked up grit, we would see this picture of Jason. 🙂