How Many Promises Have You Broken? 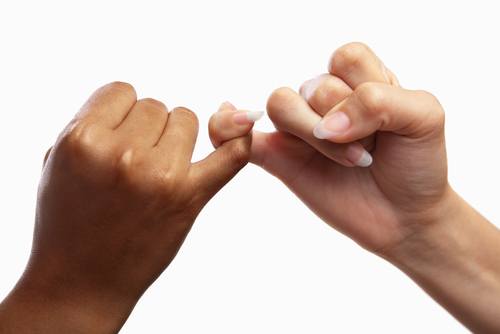 “Broken vows are like broken mirrors. They leave those who held to them bleeding and staring at fractured images of themselves.”

A broken promise erodes trust and integrity, and done repeatedly, will create distrust and break a friendship.

Most people don’t make promises with no intention of fulfilling them (unless you are a corrupt politician, lol), but nevertheless the consequences are the same. So people will create all sorts of excuses, and stories to justify why a promise was broken. They were sick, got busy at work, something came up, etc. They think this somehow makes up for a broken promise – but it doesn’t.

Bottom line, if you didn’t fulfill the promise, regardless if the reason, it still is broken – and that will weaken your word.

This is why you should be careful of what you promise to others. You do not want to bamboozle anyone by giving false expectations that you cannot fulfill.

Your goal should be to make your promise 100% unbreakable. That type of commitment to honoring your word is invaluable in friendships that breeds loyalty like no other. That however, is easier said then done…much like promises. 🙂

To work towards this goal, start by being selective in what you promise people. You don’t want to build a bad reputation for yourself by making promises left and right, only to break them all.

Sometimes people feel obligated to make a promise to someone who has given them much, even when they aren’t in a position to return the favor. They would feel socially awkward to tell that person they cannot help, so they promise something only to break it down the road.

My advice is to be honest. If being honest seems to be difficult, ask yourself why. Because to me that would mean you weren’t clear in communicating, which led someone to make assumptions that caused them to be disappointed when things didn’t work out as they expected.

The next thing is for the promises you do make, work hard on fulfilling them. If anything, you want to over deliver – whether that means finishing early, or giving them more than they expected.

When I speak of promises, I’m not just talking about big things like wedding vows. I’m talking about the little promises we all make: coming to the gym on time to train, showing up when your friends ask for your help, or taking care of household choirs.

Big promises are usually harder to break, but little promises are easy, because, well, they are little. I see have seen too many people show up late to class, out of uniform, or missing equipment – and it’s usually the same people over and over – with the same excuses: traffic, work, kids, etc.

So from that viewpoint, you can see that we actually have a lot of mini-promises we have to fulfill everyday when we think about work, family, and friends. The bigger your network, the more promises you will likely have.

But even those pale in comparison to the most important promises you can make – with yourself. If you tell yourself you are going to show up to the gym 3 times a week, and end up only going twice, you have made yourself weaker in your own eyes.

This may seem silly, but it is deadly serious. Because if you can’t keep yourself accountable, you have much less chance of being accountable to anyone, which makes you very untrustworthy.

So the best place to start with making promises is with yourself. Make a list of things you want to achieve, with definite timelines, plans, and methods for fulfilling the promise – and then stick to them.

And yes, a promise to yourself is pretty much a goal. So if you are able to smash goals, you are probably better equipped to keep your promises and make yourself someone people want to team up with.