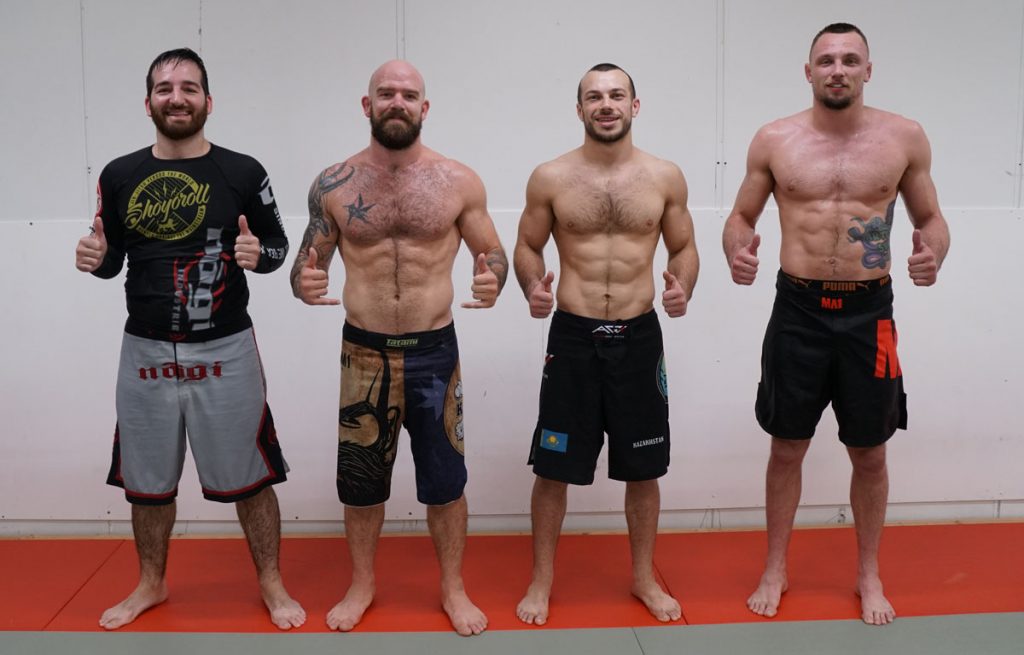 Every edition of the ADCC World Championships has upsets, but this year the upsets were bigger than ever.

What was unique to me was that I got to share the mats with two of the stars that had the biggest upsets of the day: Craig Jones and Elvira Karppinen. Each of them are part of small teams in countries not famous for grappling (Australia and Finland), so their accomplishments are even more amazing. Plus, neither of them had a fluke, as there other matches were equally impressive in performance.

I trained with Craig Jones, Giles Lachlan, and Kit Dale just before ADCC. They were a bit nervous of course, as they were all matched up with the number one seeds (Leandro Lo, JT Torres, and Romulo Barral).

I told them the same thing that I tell all competitors: everyone is human.

Whatever thoughts are rushing through your head, it is running through theirs too. If you are afraid of getting crushed by a star, they are afraid of losing to an under dog. They get tired, they get hurt, and they bleed also. No competitor on the face of this earth is unstoppable – they all can be toppled.

Sure enough, they all performed amazing. Craig of course scored one of the biggest upsets of the tournament, submitting Leandro Lo in a one sided contest, and then scoring the most beautiful submission of the tournament on Murilo Santana – a flying triangle choke.

Even though they didn’t win, Kit Dale and Lachlan Giles put on a heck of a performance and showed they belonged. Each of them lost in overtime and were just inches away from getting the win against world champions.

For me, the biggest upset of the tournament came from the Finland native Elvira Karppinen, with her dramatic win against the reigning champion Mackenzie Dern.

The match was tightly contested, and Elvira scored a sweep to get ahead on the score cards, but Dern attacked hard and put Elvira in her signature submission, the MacKenzieplata – a combination of an Omoplata with a rear naked choke.

With just seconds left in the match, Elvira showed a lot of heart and determination to escape the hold and win the match. She went on to fight a very close match with Bianca Basilio, which I felt she won but lost on a referree’s decision.

More impressive is that she had only a few days notice, and had no training under the rule set, which is very difficult to prepare for.

It doesn’t matter who your opponent is – they can be beat.

People often put top competitors on a pedestal way above themselves, and overlooking their own abilities. We are all capable of amazing things, but we have to believe in ourselves first.

This years ADCC was really inspiring to me. Even though Gordon Ryan was certainly not an underdog, most people were not expecting him to do as well as he did. He is only 22 years old, with just 6 years of training. He went on to submit Keenan Cornelius, Cyborg, Craig Jones, and Mahamed Aly on his way to an 87kg Gold and Absolute Silver.

If he would have listened to all the haters, he would have never bothered to compete, and now that young man is sitting on top of the world.

So go ahead and write down all of your excuses on a piece of paper, and then label them as obstacles. Then write down how you will address each of them on your way to achieve your goals.

People are out there grinding at big dreams that their friends and family claim are crazy, and will go no where. Once they do reach their goals through bold actions, those same people will be quick to call them lucky. LOL!

So let’s get lucky and take some action towards are goals today! 🙂