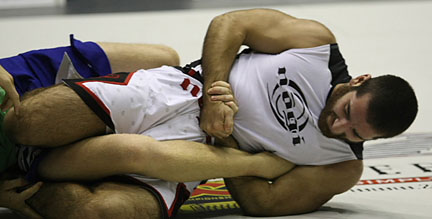 My preparation was perfect.

After not competing for about 1 year, I have never felt better stepping onto the mats. My first opponent was Rodrigo Caporal, a BJJ Black Belt and an accomplished MMA fighter. It was obvious that he had a Judo background, and we squared off for a good few minutes wrestling.

My brother had warned me that he liked to go for flying arm bars, so I noticed he was trying to set me up for one. Sure enough, he went for it and I was able to quickly take his back and sink in a rear naked choke. It happened so fast, I even surprised myself and didn’t really have the mindset to finish. He had a lot of fight in him, and was able to peel off the choke before I could readjust.

Then we continued our wrestling battle, and he went for a head inside single leg. I hit my patented Kimura Trap, and got him stuck on his back with one hook. I was close to getting the second hook, but he did a good job of defending and we ended up scrambling to our feet. He shot again, and I went for a Kimura Trap but I fell to my knees. Time was almost up, so I stayed conservative and defended the hooks. He got close to getting them in, but I was able to stand up as time went out.

We then went into two over times, but I was able to push the pace and threaten him a bit more and got the judges decision in a close match.

For the first round doing 20 minutes, I felt awesome. I could have done another 20 minutes no problem. My cardio is the best it has ever been in my career.

My second match was with Pablo Popovitch, someone I have been wanting to face for a long time. I knew going in it would be my toughest match, as he has great wrestling and BJJ. Sure enough, it was a wrestling match from the start, with a lot of measuring of us two. I knew he had a great arm drag to trip double, and was cautious not to reach out. Still, he managed to catch me with it and put me on my back. I quickly turned to avoid points, but he ended up getting the hooks in and scoring 3 points.

I then had a hard time escaping, while he was trying to catch a submission. I did manage to escape, but only with 30 seconds remaining I had top position. I worked to pass, then tried an Estima foot lock, which caused him to shoot into me. I jumped for a guillotine choke, but missed and he ended up on my back again. He was setting up an arm bar as time went out.

Although I lost, I did my best out there. In hindsight, my strategy was flawed in this match up. I was counter fighting a bit too much, when I should have been more aggressive with my take down attempts. Pablo’s speed with his double was incredible, and my reaction time wasn’t quick enough. I know against people with speed, you have to be first. I won’t make the same mistake twice! 🙂

I am preparing myself now for the Absolute division tomorrow. I have been eating clean and resting for tomorrow, and I know I am in great position to pull off a Dean Lister like run in the Absolute. My conditioning is amazing right now, and I know I can grind out any body on the mats. I will be more aggressive this time around, and learn from my performance today.